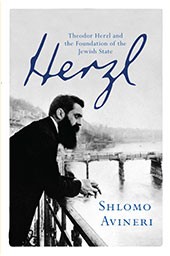 In his autobiography, Chaim Weizmann commented that Theodor Herzl was ‘not of the people’ despite being an inspiring leader and brilliant organiser. The author of this interesting book, the eminent Israeli academic and public intellectual, Shlomo Avineri, has not written a conventional biography of Herzl. Instead he has tried to capture the authentic and private man through his underutilised diary entries – a litany of frustrations, disappointments and silent fury at those who walked the corridors of power.

Avineri concentrates on Herzl’s Zionist period – a period of less than nine years before his early death at 44 in 1904. He demonstrates that Herzl was a serious thinker, profound political strategist, spin doctor, journalist, diplomat and playwright all rolled into one. This is all the more remarkable because unlike his contemporaries in Russia and Poland, Herzl had never read Zionist thinkers such as Pinsker or Hess – and knew next to nothing about the lives of the impoverished and oppressed Jewish masses in Eastern Europe.

Avineri places Herzl’s path to Zionism firmly within a more general rendition of 19th century Jewish history. Zionism emerged out of European nationalism – with the Bible as a backdrop. It was often a revolt against the authority of the rabbis. Avineri makes it apparent that Herzl’s evolution was not due to an overnight revelation due to the Dreyfus affair – the standard story – but was a more gradual process, taking place over years in which anti-Semitism was rampant in the so-called civilised countries of Europe; the multi-cultural Austro-Hungary, imperial Germany and republican France – the hallowed birthplace of liberté, fraternité and égalité. It was the reactionary tracts of Wilhelm Marr and Eugen Dühring – and the apologetic speeches of acculturated Jews as Alfred Naquet in response – that offended. It was not the Dreyfus affair that led Herzl to write The Jewish State, but the election of the anti-Semite, Karl Lüeger, as Mayor of Vienna in May 1895. Herzl labelled that event ‘a new St. Bartholomew’s night’ – referring to the mass murder of Protestant Huguenots by Catholic mobs in France in 1572.

This book is primarily coloured by the latent anti-Semitic innuendo of the proud and powerful of fin de siècle Europe, and Herzl’s private reflections on his meetings with them make fascinating reading. What comes across is the supercilious sense of superiority of those who condescended to meet him. ‘Do you think that the Jews are going to give up their stock exchanges and follow you?’ questioned the Chancellor of the German Reich. ‘The common Jews would,’ replied Herzl. Pope Pius X told Herzl that the Catholic Church could not approve the Zionist movement: ‘The Jews have not recognised our Lord, therefore we cannot recognise the Jewish people.’ Herzl refused to kiss the hand of the pontiff or kneel before him – and described the Holy Father as ‘a good natured corpulent village priest.’ The Russian Minister of Finance, Sergei Witte, genially told Herzl how he had advised Tsar Alexander III that he would have had no objection to drowning ‘our six or seven million Jews in the Black Sea. But if it isn’t possible, we must let them live.’ The Turks simply used Herzl’s proposals – proposals which had no political or financial backing – to increase pressure on the French. As Herzl wrote subsequently: ‘I have left the cave of Ali Baba and the 40 thieves.’

Avineri shows us Herzl as a General Zionist before the advent of factions, viewing Zionism as neither revolutionary nor messianic, an archetypal Viennese liberal who wanted to create Vienna-on-Sea, and a mutualist who favoured a new economic model poised between capitalism and socialism. Avineri also mentions Herzl’s sense of universalism – which has been marginalised by both Zionists and their ideological opponents. He supported the Egyptian national movement and advocated establishing a fund to help the Turkish wounded in their clash with the Greeks. No doubt Herzl did this to advance the Zionist cause, but he was also influenced in his vision by the Russian anarchist, Prince Kropotkin and the Welsh social reformer, Robert Owen. As a Zionist, Herzl did not renounce his liberal principles. He wrote, ‘Just to call to mind all those terrible episodes of the slave trade, of human beings who, merely because they were black, were stolen like cattle, taken prisoner, captured and sold … once I have witnessed the redemption of the Jews, my people, I wish also to assist in the redemption of the Africans.’

Even so Herzl hardly acknowledged the presence of the Arab inhabitants in the geographical area of Palestine in his writings. The notion of ‘a land without a people for a people without a land’ popularised by Israel Zangwill, was far more prevalent. In his 1899 letter to Yusuf al Khalidi, a former Mayor of Jerusalem, Herzl assured him that the Zionists’s intentions were benevolent and would benefit everyone.

Avineri shows that, despite everything, Herzl never gave up on his vision. In the privacy of his diary he confided, ‘Perhaps a fair-minded historian will find that it was something after all when an impecunious Jewish journalist, in the midst of the deepest degradation of the Jewish people and at a time of the most disgusting anti-Semitism, made a flag out of a rag and turned a miserable rabble into a people rallying around that flag.’

Shlomo Avineri’s research casts a new light on the short, troubled and driven life of Theodor Herzl. This will become an important work for all students of Zionist history.